iXblue is a high-tech enterprise originally founded in 2000 to provide a new class of instruments based on fiber-optic gyroscope technology. They now offer a range of cutting-edge components and instruments that are unsurpassed in terms of sensitivity, precision and stability for applications in navigation, positioning and attitude control. iXblue’s vertically-integrated organization incorporates the development and production of specialty optical fibers, lithium-niobate phase modulators, and quartz accelerometers. In its continuous pursuit of scientific innovation, iXblue has invested in the most advanced technologies for inertial navigation—most recently in the field of cold-atom physics, which has emerged as a potential breakthrough technology due to the inherent advantages of atomic spectroscopy and matter-wave interferometry. For this reason, iXblue has been collaborating for the past five years with LP2N (Laboratoire Photonique, Numérique, et Nanosciences) at the Institut d’Optique d’Aquitaine (IOA) in Bordeaux. LP2N is today one of the world’s leading laboratories in the physics of laser-cooled atoms and atomic inertial sensors—a field which has made spectacular progress over the past two decades. The coherent control and manipulation of atomic wavepackets with light can be harnessed to construct extremely sensitive and low-bias inertial sensors—making them interesting candidates to replace classical sensors. However, the use of cold atoms in navigation and positioning applications still faces many scientific and technological challenges. 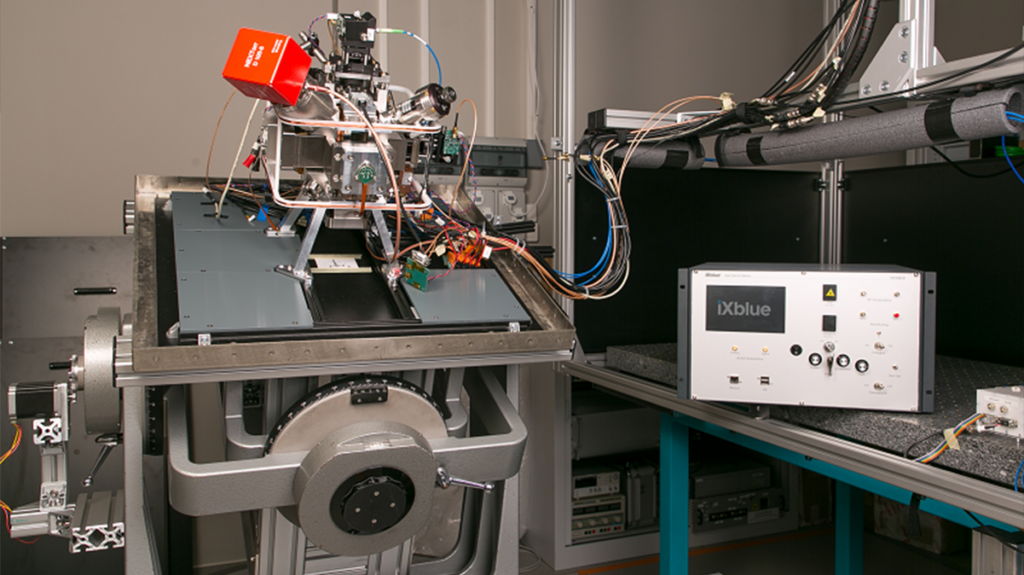 The joint Laboratory iXAtom was created within the IOA, with a team of researchers, engineers and PhD students. The aim of this collaboration is to make technological advances using laser-cooled atoms to develop the next generation of inertial sensors for industrial, military and Space applications. In the near future, iXAtom plans to develop a compact three-axis accelerometer based on new techniques in atom interferometry. The ultimate goal of this collaboration is to build an autonomous hybrid device which can compete with technologies based on global positioning systems without the drawback of external communication for recalibration.

Work is being carried out on three major axes: (i) the development of a navigation-compatible cold-atom sensor head, (ii) new theoretical approaches to the operation and enhanced performance of such an instrument, (iii) feasibility experiments carried out to verify the validity of relevant concepts. The laser system is an essential building block of these quantum sensors. Using recent developments in Telecom fiber-based technology, a new laser architecture was developed for laser-cooling and manipulating rubidium atoms. This ModBox laser source, patented in 2018, is based on an iXblue MXIQ-ER CS-SSB optical modulator operating at 1560 nm and second-harmonic generation to 780 nm. This key component suppresses the carrier frequency by 25 dB at 1560 nm and generates two optical sidebands that can be independently controlled in power, frequency and phase using off-the-shelf RF components. These principle sidebands are used to induce optical transitions in rubidium—allowing one to split, reflect and recombine atomic wavepackets to realize an inertial sensor. With this innovative architecture, the characteristics of the RF source in terms of agility, stability, and response time are directly transferred into the optical signal thanks to electro-optic modulation. The iXAtom team recently realized an atomic accelerometer with this new ModBox laser source, and demonstrated improved performance compared to other laser architectures based on standard phase modulators. Beyond these promising scientific results, the collaboration between iXblue and the LP2N is exemplary of successful transfer of knowledge and technology between a prestigious academic laboratory and high-tech industry.