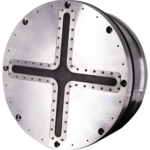 SeapiX-F revolutionizes fishing techniques by providing optimally calibrated information and unparalleled surveillance of a designated underwater spatial volume. It answers some of the toughest demands placed on skippers, offering total visibility over the underwater environment so that informed, strategic fishing decisions can be made in real time thanks to realistic quantitative distribution of biomass.

Each SeapiX head covers a volume of 120° X 120°. SeapiX system can be a combination of one, two or three heads, downward-looking or side-looking, depending on the application. SeapiX capability changes the habits of skippers in their perception of the abundance and discrimination of species thanks to its unique water volume coverage and volumetric resolution. It provides realistic quantitative and qualitative indicators for maneuvering decisions. Now, the rich sampling offered by this new technology makes it possible to precisely evaluate the biomass present over a wide range of depths – from 5 m to 500 m.

For all fishery applications

For each fishing method, SeapiX offers specific processing to optimize the relevance and presentation of biomass and ecosystem information.

When operating for the first time, the skipper selects his fishing technique and benefits from an optimized presentation of fish detection and abundance and selectivity indicators most suited to his activity. In the event of a change in fishing techniques (for example from Bottom Trawler to Pelagic Trawler), the skipper selects his new working environment in one click.

In addition, SeapiX can be mounted as “Downward Looking”, as “Side Looking” or as “Forward Looking” 3D sonar, offering always suitable and flexible solution according to fishing technique requirements.

SeapiX introduces into the world of fishing a new concept of modular multi-transducer 3D Sonar allowing to ideally meet the specific expectations of each skipper. SeapiX system can be made up of 1 to 3 Transducers, each one oriented downwards, forwards or on one side to cover large volumes of 120 ° x120 ° in real time with high volumetric resolution. All combinations are possible, the skipper has very simple all-in-one display of merged fish detections for an immediate understanding of the fishing situation all around the vessel.

SeapiX is based on a unique technology of double Multibeam orientable in all planes. It results in countless possibilities for forming sonar and echosounder beams, each with settings options (Angles, Range, Modulation, Power, Angles, Gains, Tilt …). To allow all skippers to automatically benefit from the best settings in all circumstances, SeapiX provides factory “Mode of Operation” optimized for each fishing method and each working stage. A simple click on the Mode illustration allows to switch from one configuration to another with its own screen layout. Each skipper can then customize his own Mode or return to the programmed factory modes in one click. For advanced or scientific users, SeapiX allows you to create new “Expert Modes” with customizable adjustment parameters offering countless possibilities.

This accuracy of sampling in “Voxels” of small volumes of the biomass proves to be a decisive factor, especially for the near bottom trawling activity. In this very sensitive context, which consists in discriminating the individual echoes of fish at less than 2m from a strongly echogenic bottom, the treatment of multiple small Voxels makes it possible to limit the unwanted effects of the bottom in the discrimination of the biomass, and thus to obtain a more realistic quantitative estimate and TS characterization.

SeapiX provides a very realistic assessment compared to classical Split Beam Echo sounders due to their TS beam forming dead zone and use of only one wide single beam. The amount of metrological information reaches 680,000 Voxels in real time, (conventional echosounder produces 2,500 Voxels only in real time).

According to TS distribution curve, processed from all running swaths, biomass database gathers up to 200.000 single targets in order to make geographical mapping of fishes and to sort out targets strenghts represented as « Class of species ». 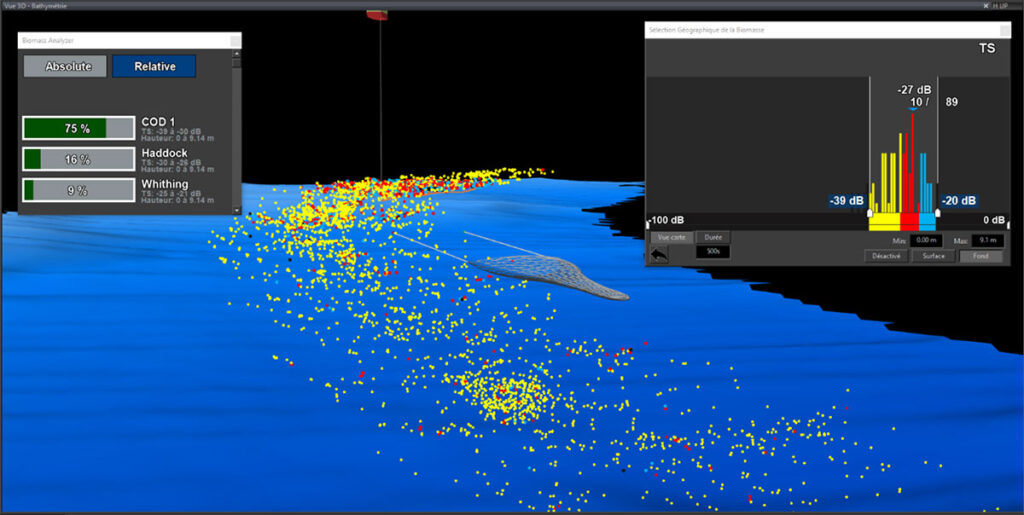 Complete Fishing operation at a glance

Skipper can optimize his manoeuvring stage, by choosing shoals and by minimizing by-catch and fuel consumption for useless actions. 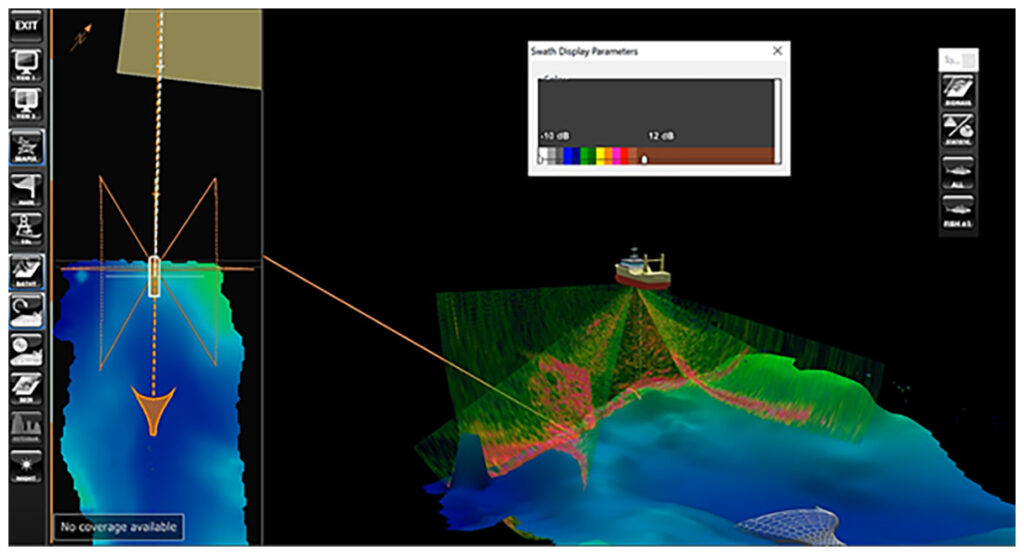 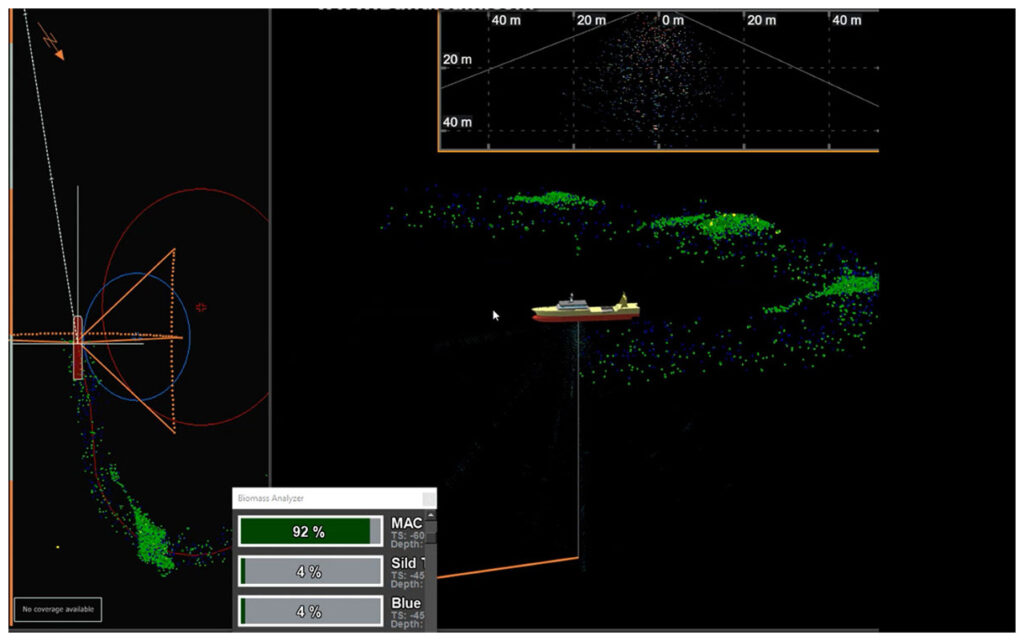 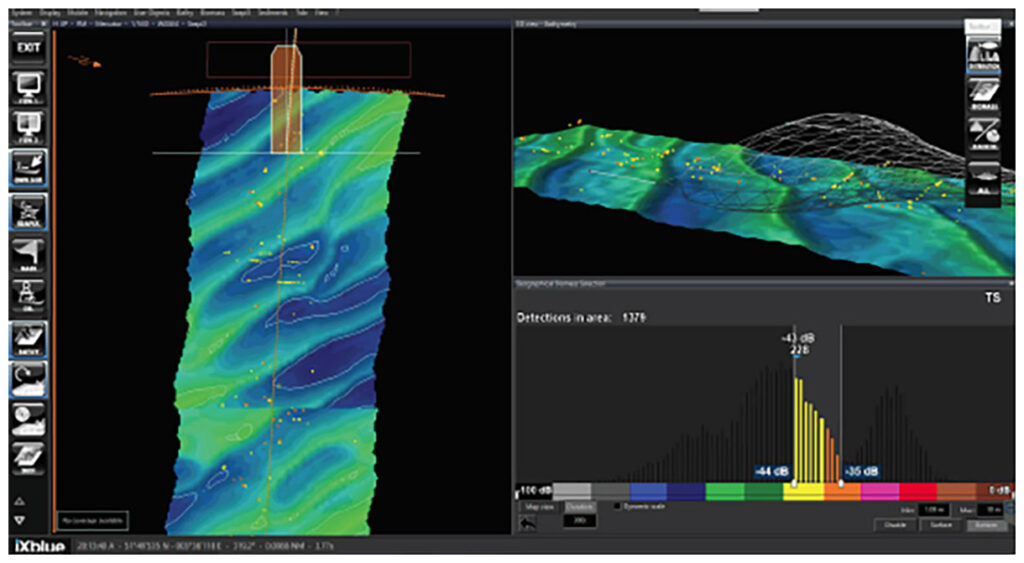 For more detail about each fishing application, please refer to this page