Constructed entirely of composite materials at the iXblue shipyards in La Ciotat, the vessel offers exceptional work capacity for its size, including over 200 sq. ft. of stern work deck and 1 ton of carrying capacity.

Designed by iXblue to implement up to 8 divers as well as scientific equipment (sonar, magnetometer, ROV, AUV, etc.), the vessel offers great stability and performance characteristics supporting an exceptionally wide range of missions.

The propulsion is provided by two 430 hp Cummins engines combined with hydrojets offering DP dynamic positioning capabilities (holding of position, speed and heading on a given route, virtual anchoring). This mode of propulsion by water jet provides optimal safety for divers and high performance even at low speeds thanks to the large turbine of the specialized water jet system used. Depending on the configuration and the carrying load, the vessel is capable of 22 knots.

The vessel benefits from a high level of equipment, coming with a 750 kg single-arm gantry crane, a 250 kg jib, a lateral pole, a diving compressor and a generator set.

Operating out of Marseille, TRITON will perform missions of prospection, detection, appraisal or underwater excavations throughout the Mediterranean. Its role will be to cover for the DRASSM’s flagship, the André Malraux (36m) whenever the latter is on assignment in the Atlantic, the Channel or the North Sea. The hydrographic survey ship André Malraux was also built by H2X and delivered in 2012. It has already covered more than 40,000 nautical miles to date. 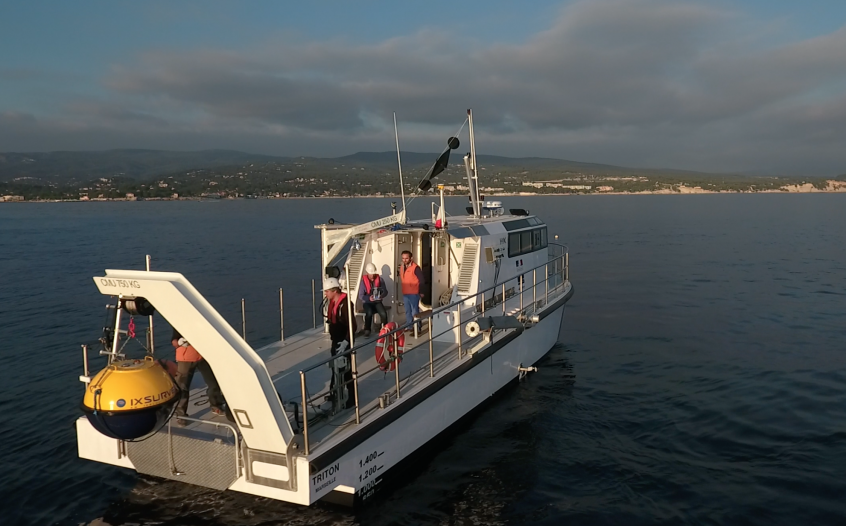 Triton, son of Poseidon and Amphitrite, was christened in Marseille on December 15 by the ship’s sponsor Florence Richez.