For more than 10 years, iXblue has been engaged in a fruitfull collaboration with the team of Mathieu Laroche, researcher at the CIMAP lab in Caen, a joint research lab of CNRS/CEA/ENSICAEN/Univ. of Caen-Normandie on ions, materials, and photonics. It aims at developing new sources of laser based on optical fibers doped with Neodymium (Nd) for blue/deep-UV wavelength laser emission.

Nd-doped fiber laser sources can emit at high power (more than 80 W) near 900 nm which is useful in many scientific or technological applications requiring accuracy as much as strict power. They can be used as femtoseconds pulsed lasers in the 920 nm regime in medical imaging for the “two-photon microscopy” technique (i.e cellular tissues), as continuous-wave single-frequency lasers in the blue domain (frequency doubled) to cooldown strontium atoms for quantum applications. But they can also serve as lasers emitting in the Deep-UV (frequency quadrupled) to fasten the material processing/characterization (due to their high energy and accuracy), to replace excimer lasers (i.e fiber Bragg gratings inscription) or to generate laser induced fluorescence to detect explosive devices (at around 230 nm).

The lasers commonly used today to reach the near-IR spectral domain is the titanium-sapphire (Ti:Sapphire) laser. It is a quite voluminous solid laser that requires an additional pumping laser, and that needs regular and important maintenance checks, making it quite expensive. All-fiber based lasers are much easier to install and maintain.

The lasers based on ytterbium doped optical fibers are quite common today, but they emit at a unique long wavelength at 1μm. From all silica-based fibers only lasers based on neodymium doped optical fibers can directly reach such short wavelength as 900 nm. Another advantage of the Nd-doped fiber laser is the possibility to double or even quadruple its frequency via non-linear crystals, to obtain several watts of power in the blue region (450 nm) or around a watt in even shorter wavelength (in deep-UV around 225 nm).

But the development of Nd-doped fiber lasers faced some challenges. One of them comes from the competition between two transitions of neodymium in the doped core, the transition at 910 nm (3-level scheme) and at 1060 nm (4-level scheme). The latter is much more efficient and must be attenuated to foster the emission at 900 nm. A second major challenge is the non-linear effects appearing, in pulsed regime and single-frequency regime, when the power increases in the optical fiber.

On small 5 μm core fibers, a “W-profile” shaping with controlled leak of the 1 μm wavelength was first designed by iXblue. A few watts could be obtained from this PM fibers. For higher power, it was possible to achieve even higher output powers thanks to the use of LMA fibers provided by iXblue. It would have been
impossible to deal with the non-linear effect with normal geometry of fiber and “W profiles” are inefficient on larger core size. In order to keep as low as possible the 1060 nm emission, the design had to be optimized for a better core/clad ratio, also by playing on the absorption rate, doping levels and the length of the fiber, while maintaining the polarization and a low NA. They were challenging technological moves successfully overcome by iXblue. 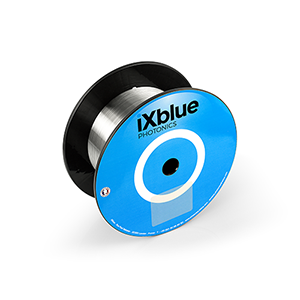 iXblue saw a rising interest from its customers for this type of fiber laser source (i.e fiber lasers for the 2-photon microscopy) and the opportunity to industrialize them. It is a direct result of the collaboration with the CIMAP lab.

The joint research program “NEODUV” is in progress until end-2023. Funded by the French National Research Agency (ANR), it involves CIMAP (Caen) and LP2N (Bordeaux) academic laboratories and their industrial partners iXblue and Oxxius (Lannion). The plan is to significantly increase the performances of laser sources based on neodymium doped alumino-phospho-silicate fibers (SiO2-Al2O3-P2O5-Nd2O3) in single-frequency and short-pulse regimes. The first step is to develop a fiber with iXblue, then a laser source in pulsed regime at CIMAP Caen, the continuous-wave single-frequency in blue wavelength to cool down
strontium atoms with LP2N, and the frequency conversion stages with Oxxius. The consortium combines unique competencies at the worldwide scale for those developments.

The collaboration with the CIMAP lab is expected to bring more outcomes in the near future in term of technological developments such as new combiners that do not exist yet. Some mode adaptors are also expected as they cannot be manufactured in a research lab for such applications in the 900 nm regime. The
next perspectives for the CIMAP research team, still in collaboration with iXblue R&D teams, is the generation of high-energy ultra-short pulses (femtosecond). It will require the testing of several iXblue optical fibers to choose the best match for the amplification level within a MOPA architecture. 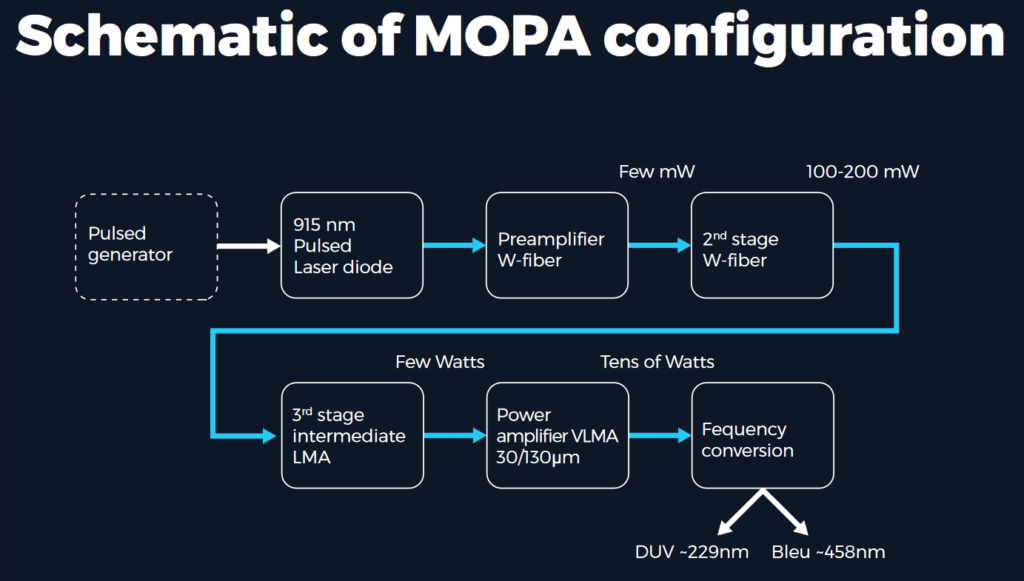