iXblue’s optical phase modulators have been chosen by NASA to be integrated onto the Laser Ranging Interferometer of both satellites of the GRACE-FO (Gravity-Recovery-and-Climate-Experiment Follow-On) space mission. Launched in May 2018, it is the first time that an optical interferometer operates between two satellites.

iXblue designed, manufactured and carried out qualification tests for the optical phase modulators, which were delivered at the start of 2014 to NASA’s Jet Propulsion Laboratory (JPL), managed by the California Institute of Technology. The optical phase modulators were integrated into the laser frequency control and servo system – the central part of the Laser Ranging Interferometer used in the metrology instrumentation of the satellites. 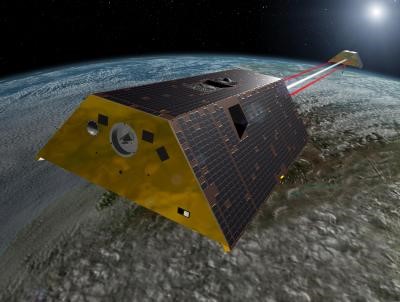 Artist’s rendering of the twin spacecraft of the Gravity Recovery and Climate Experiment Follow-On (GRACE-FO) mission, launched in May 2018. Credit: NASA/JPL-Caltech

“iXblue is very proud to work with NASA on this particular mission. The reliability of components sent into space has to be absolute with no maintenance interventions or operations being possible during the mission, explains Henri Porte, Director of iXblue Photonics division. iXblue is one of the rare companies in the world to have mastered the technology for optical modulators in lithium niobate for near infra-red, capable of operating in a space environment (vacuum, radiation, launch vibrations, etc.). Its know-how is now recognized by the world’s most important international space agencies such as the CNES, the ESA and NASA”.

The GRACE Follow-On mission aims at continuing the legacy of GRACE, tracking Earth’s water movement and surface mass changes across the planet. Measuring the redistribution and transport of mass (e.g., of ice sheets and glaciers, underground water storage, the amount of water in large lakes and rivers etc.) around Earth is an essential observation for understanding current and future changes of the Earth’s hydrosphere and its subcomponents. The Laser Ranging Interferometer is a technology demonstration instrument to enable future mission to better and more efficiently measure and monitor these vital global mass transports. The role of the LRI optical phase modulator is to derive a control signal to stabilize the optical frequency of the laser, enabling the interferometer to make extremely precise measurements. The system was declared to be fully operational by NASA within a few weeks after launch. The choice, by NASA, to opt for modulators from iXblue, is a clear endorsement of the high degree of reliability and performance offered by the group’s photonics technology.

Optical phase modulators are not the only iXblue technology on board this mission. Indeed, iXblue’s Astrix inertial navigation system is also found on each of the two satellites as payloads. A double recognition of the company leading expertise in the field of onboard space instrumentation.

About GRACE-FO
GRACE-FO is a partnership between NASA and the German Research Centre for Geosciences (GFZ). JPL manages the mission for NASA’s Science Mission Directorate. The Laser Ranging Interferometer is a technology demonstrator instrument developed by a US-German partnership.