The joint laboratory iXAtom brings together the knowledge of the French company iXblue—experts in optical gyroscopes, photonics and inertial navigation—and personnel from LP2N Lab (Photonics, Numerical and Nanosciences Laboratory, CNRS/IOGS/Univ. Bordeaux) specialized in atom interferometry. The aim of this collaboration is to make technological advances using cold atoms to develop the next generation of inertial sensors for industrial, military and space applications, with anticipated improvements in their performance.

In the near future, the development of a compact gyroscope and a three-axis accelerometer based on new techniques in atom interferometry is planned. The ultimate goal of iXAtom is to build a new autonomous device which can compete with technologies based on global positioning systems without the drawback of external communication for recalibration. 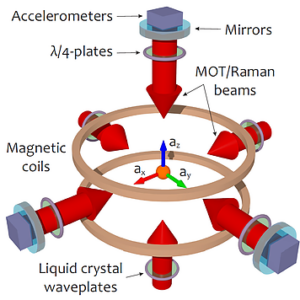 The quantum accelerometer used at iXAtom is based on cold 87-rubidium atom interferometer and velocity-sensitive Raman transitions.

A 3D magneto-optical trap is loaded from background vapor and the cloud is then cooled to a few micro-Kelvin using standard optical molasses techniques. Atoms are prepared in a single internal state and are interrogated by Raman beams in a Mach-Zehnder interferometer during free fall. The population of the internal states is probed by resonant fluorescence. The resulting interference fringes exhibit a phase shift that depends on the acceleration a of the atoms relative to the mirror, and scales as the square of the interrogation time T.

Compact and robust systems are crucial for onboard applications such as inertial navigation. A field-deployable sensor head with a compact form factor designed for multi-axis accelerometry has already been constructed.

A retro-reflected beam geometry allows to form phase gratings for counter-propagating Raman transitions along each axis. These beams are controlled in polarization with liquid crystal waveplates. Classical accelerometers, which are fixed to the rear of the mirrors, are used to correct for vibrations and to form a hybrid sensor. 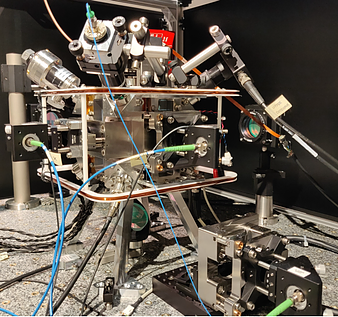 The laser architecture used at iXAtom, which utilizes telecom components for their robustness and reliability, combines an all-fibered IQ modulator operating at 1560 nm and a wavelength conversion module to 780 nm. 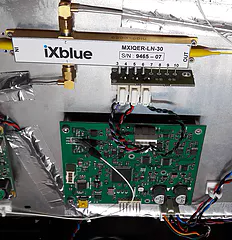 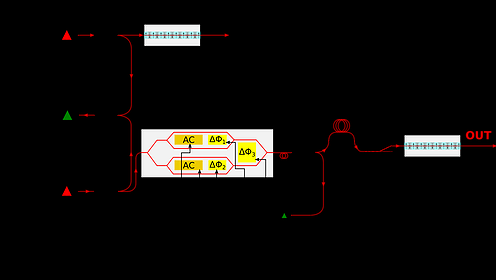 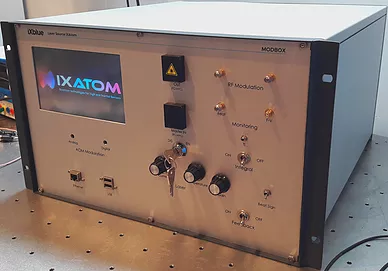 A three-axis rotation table was recently acquired, which allows to tilt the experiment. This table will enable to perform sequential multi-axis measurements in different orientations, test various systematic effects, and take steps toward trully mobile implementations of the prototype. 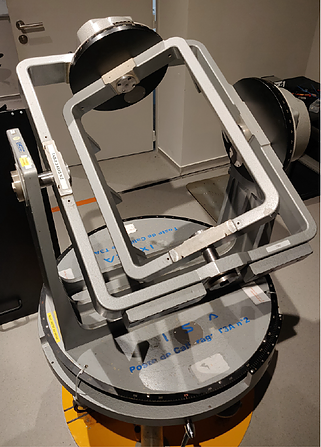 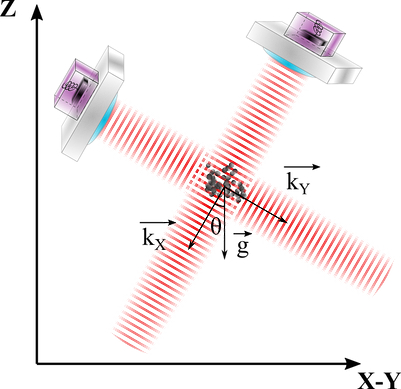 For mobile operation of the hybrid accelerometer, it is crucial to compensate for rotations of the sensor head which easily prevent any measurement to be performed. Indeed, due to linear free-fall trajectory of the atomic clouds, a rotation of the reference frame would cause a bad overlapping of the wavepackets in the interferometer.

For this purpose, low-noise, high dynamic range and sensitivity Fiber-Optics Gyroscopes (FOGs) were installed along with high bandwidth, precision and stability piezo tip-tilt platforms. The FOGs ensure a continuous measurement of rotation rates along the 3 measurement axes which, once integrated and converted into a relevant signal, drive the tip-tilt stages. The goal is to correct the alignment of the reference mirror in real time during the interferometer in order to prevent the contrast loss, which is the main issue with undergoing rotations while performing cold atom inertial sensing. Additionally, rotations measurements provide knowledge of Coriolis accelerations and authorize to feedback it onto the laser phase in real time, to ultimately track the central atomic fringe.